Hillaldam partners with Rhinos Without Borders 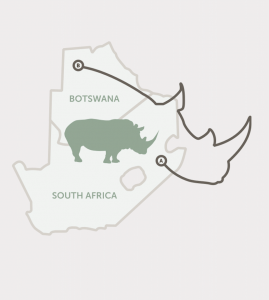 **BREAKING NEWS**
Hillaldam partners with Rhinos Without Borders to assist them with the transportation and relocation of 100 Rhinos from South Africa to Botswana.
There has been a 1363% increase in Rhino poaching since 2008 and at the current model, there will be no Rhinos left by around 2020. In 2014, Rhinos Without Borders was born from the idea to relocate as many Rhino as possible from high risk areas to low risk areas. It is a project spearheaded by &Beyond and Great Plains Conservation. The translocation will cost around USD$5 million. The first stage of the relocation program has already been underway with the use of the existing wooden bomas (which are both time consuming to build, and leave permanent impact on their site) however with the fabrication of Mobile Steel Release bomas, all the current problems will be rectified and the Rhinos can be released into safer and even more remote areas rather than just where the existing wooden bomas have been erected.
This is where Hillaldam Sliding Door Systems are proud and excited to be involved with this extremely worthy cause. We have donated all the Sliding Door Hardware for 10 gates on the mobile bomas being erected. The gear donated is our tough & robust Straightaway 1000S. The next round of capture and release is already underway. We cannot wait to bring you more news and photos on this incredible project of hope for our Rhinos!
(For more information- http://www.rhinoswithoutborders.com)